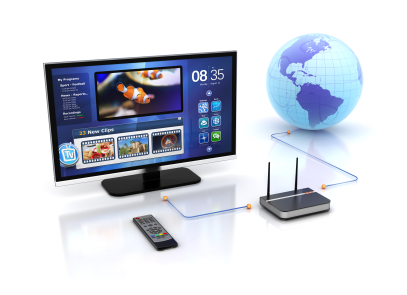 Technological improvements in bandwidth and speed helped launch online video marketing, an exciting field that allows you to reach business customers and consumers with promotional video over the Internet. Technology continues to evolve, with the potential to deliver Internet video marketing to the larger screens found in living, family, and conference rooms around the world. Is your promotional video ready for streaming Internet TV devices?

What is an Internet TV Device?

The popularity of high-speed Internet access spawned a revolution in online video, and websites such as Hulu, Netflix, and Amazon Prime, soon popped up with libraries of free or low-cost movies and television shows that consumers could watch online. While watching movies and TV shows online has its advantages, watching on a small screen with tiny speakers doesn’t compare to watching on a large screen TV with surround sound. Thus, manufacturers began producing set top devices capable of streaming Internet content directly to the TV. These devices include some Blu-ray players and DVRs, gaming consoles such as the Nintendo Wii and Xbox 360, and standalone boxes such as the Roku or AppleTV. Some television sets now come equipped with Internet streaming capabilities as well.

Though these devices are typically marketed to consumers as a means of watching Internet TV and streaming movies from services such as Netflix, your online video marketing and promotional video productions may find their way to your targeted audience through an Internet TV device.

For example, most streaming TV devices include access to YouTube. If you market your promotional video on YouTube, viewers may watch from their couches instead of their office chairs. In addition, many devices include Web browsers, so it’s possible for viewers to surf your website and view your Internet video marketing clips on their large screen TVs.

What Does Internet TV Mean to Your Online Video Marketing?

While your promotional video may look amazing on a 15-inch laptop, how will it look on a 55-inch HDTV? Video resolution becomes a much more important factor thanks to this possibility. Fortunately, many video production companies specialize in online video marketing and can shoot broadcast quality footage in high definition. If broadcast quality production values and high definition haven’t played a prominent role in your Internet video marketing plan, now’s the time to prioritize them.

While shooting a promotional video with the thought that it could find its way onto the big screen is a good first step, streaming Internet TV brings new possibilities. You could create your own online video marketing channel for many of these Internet streaming devices. For example, a quick look at Roku’s current channel list shows that CNET, Fandango, JTV (Jewelry Television, a company that sells jewelry and jewelry making supplies) each have active Roku channels. If you have an existing catalog of online video marketing messages, tutorials, or lectures suitable for a general audience you could create a public Roku channel. If your material is geared toward a niche such as C-level executives, you could potentially create a “private” Roku channel.

Internet video marketing has changed dramatically in a short time period, and Internet TV could be the next evolution. Today, people may watch your promotional video on any number of devices including smart phones, tablets, e-readers like Kindle’s new Fire, netbooks, laptops, desktop computers, and now, televisions. With screen sizes ranging from mere inches to over 100 inches, the video quality of all of your online video marketing needs to be top-notch. The days of using a low resolution camera and producing a short promotional video without understanding how your viewers will watch it are over.

What do you think about the future of online video marketing? Will the Internet and television finally combine? If so, how will that affect your Internet video marketing plan? Share your thoughts in the comments section below: